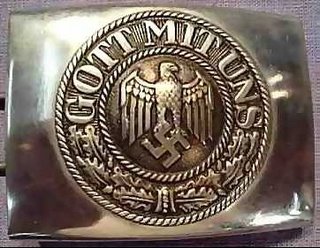 This information was sent to me by a friend. I thought it worth sharing. For those of you who don't know, the above photo is a Nazi belt buckle which reads "God with us."
"The national government will maintain and defend the foundations on which the power of our nation rests. It will offer strong protection to Christianity as the very basis of our collective morality. Today Christians stand at the head of our country. We want to fill our culture again with the Christian spirit. We want to burn out all the recent immoral developments in literature, in the theater, and in the press - in short, we want to burn out the poison of immorality which has entered into our whole life and culture as a result of liberal excess during recent years." - Adolf Hitler
Source: The Speeches of Adolf Hitler, vol. 1 (London, 1942), 871-72.
The most famous Christian of the 20th century was Adolf Hitler.

Sure, we call Hitler infamous today. But before he started gobbling up European countries like they were little bratwurst sausages, Hitler was famous as a world leader with high moral values and a distinctly Christian vision.

In fact, no present politician has more blatantly declared his Christianity than Hitler, or has had his faith so widely accepted. Millions of Christians around the world admired the savvy tyrant; a couple of his more recognizable fans included Britain’s Lloyd George and that all-American idol of idols, Charles Lindbergh. The most appealing of Hitler’s “Christian” attributes included:

•His morality. He did not smoke or drink and he abhorred pornography and homosexuality.

•His call for his nation to repent. “Providence withdrew its protection and our people fell… And in this hour we sink to our knees and beseech our almighty God that He may bless us, that He may give us the strength to carry on the struggle for the freedom, the future, the honor, and the peace of our people. So help us God.” (March 1936)

*His stand against secularism: “Secular schools can never be tolerated because such schools have no religious instruction, and a general moral instruction without religious foundation is built on air; consequently all character training and religion must be derived from faith….” (April 1933)

*His war on atheism: “We were convinced that the people need and require [the Christian] faith. We have therefore undertaken the fight against the atheistic movement, and that not merely with a few theoretical declarations: we have stamped it out.” (October 1933)

*His blending of church and state: “National Socialism neither opposes the Church nor is it anti-religious, but on the contrary it stands on the ground of a real Christianity… For their interests cannot fail to coincide with ours alike in our fight against the symptoms of degeneracy in the world of today, in our fight against a Bolshevist culture, against atheistic movement, against criminality, and in our struggle for a consciousness of a community in our national life…These are Christian principles!” (August 1934)

•His faith-based charity: “With a tenth of our budget for religion, we would thus have a Church devoted to the State and of unshakable loyalty.” (January 1939)

•His God-given mission to cleanse Germany of evil as personified by the Jews, liberals, homosexuals, labor leaders, homeless people, immigrants from inferior cultures, and the weak and sick. “Hence today I believe that I am acting in accordance with the will of the Almighty Creator: by defending myself against the Jew, I am fighting for the work of the Lord.” And, “We want to fill our culture again with the Christian spirit… We want to burn out all the recent immoral developments in literature, in the theater, and in the press—in short, we want to burn out the poison of immorality which has entered into our whole life and culture as a result of liberal excess…” (March 1936)

•His patriotism and the belief that his nation’s weakness was because “...the watchword of German foreign policy ceased to be: preservation of the German nation by all methods; but rather: preservation of world peace by all means.”

•His condemnation of others who sought to use religion for personal gain. “Worst of all, however, is the devastation wrought by the misuse of religious conviction for political ends. In truth, we cannot sharply enough attack those wretched crooks who would like to make religion an implement to perform political or rather business services
for them. These insolent liars, it is true, proclaim their creed in a stentorian voice to the whole world for other sinners to hear; but their intention is not, if necessary, to die for it, but to live better.”

•His vow to end terrorism: “…we must not dodge this struggle, but prepare for it, and for this reason acquire armament which alone offers protection against violence. Terror is not broken by the mind, but by terror.”

•His devotion to the Ten Commandments, which he proclaimed the foundation of Nazi Germany: “The Ten Commandments are a code of living to which there’s no refutation. These precepts correspond to irrefutable needs of the human soul.”

Historians seem to have done their best to silence or suppress the outspoken Christianity of Hitler and the Third Reich. Why is this? It seems to me that there are many yet today who will follow any politician who "boldly" proclaims his Christian faith, ready to turn a deaf ear to any lies he may tell and a blind eye to whatever atrocities he may commit in the name of God, Christ and Country. Think about it.
Posted by voixd'ange at 7:05 AM 5 comments: 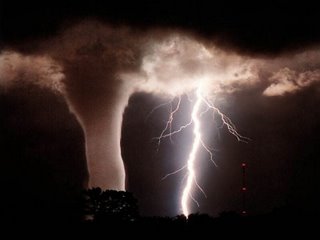 I had another one of my dreams.
I was riding down a beautiful boulevard. Being who I am, I had decided to ride sitting on the roof of the car, enjoying the air and the sunshine. The street was tree lined and the median was planted with lush tropical follaige and flowers. I was enjoying the day and the ride when in an instant everything changed. The sky grew dark, the wind picked up rain began to pelt down and tornado sirens began to sound. I climbed down into the car and looked out the windows searching the sky for the tornado. I spotted the funnel cloud and noticed that the tornado was in the process of forming. It would jet down and then rise back up again and again. The driver of the car began to panic and began to take uneccessary risk which were putting myself and the other passengers of the car in danger. I leaned forward and I put my hand on the shoulder of the driver and said firmly, " If you focus and speed up a little, you can beat this storm."
Posted by voixd'ange at 7:24 AM 5 comments: