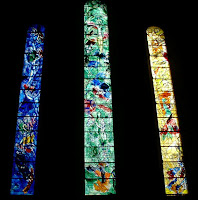 I just returned from my fourth trip to Paris. the more often I go, the more I love it. This time I went with my friend from church, Beverly Morris. It turned out that we are very compatible travel companions. We Flew into Zurich and stayed there for about three full days and then took a train to Paris. That was nice, but I was disappointed because I had booked a window seat and still ended up next to a partition between windows. Zurich is a beautiful little city, very quaint. My main goal was to see the Chagall windows in the Fraumunster church. they were exquisite.


Our Hotel was small and wonderful. The Hotel du Theatre was located right at the beginning of Old Town and just a few blocks away from the main rail station and the beginning of the main shopping thoroughfare. The location could not have been better. We explored the Old Town the evening we arrived. 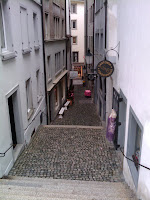 We found out as well as being near old town, we were also located conveniently next to the red light district of Zurich. I've seen several red light neighborhoods in Europe, and I have to say this was one of the tamer versions. On our second day in Zurich we explored the upscale shopping district on Bahnhofstrasse. It was as one would pretty much expect it to be. A beautiful street lined with beautiful shops. I will say this, the Swiss do indeed take their chocolate very seriously. After passing by countless gourmet chocolate shops, we stopped in a little artisan chocolate shop on the way to Fraumunster. It was there that I purchased chocolate for my sons and experienced chocolate laced with absinthe. It made my head feel like my brain was full of champagne bubbles. I could see the allure.


We bought scads of souvenirs. That was a new experience for me. I do bring back gifts from my trips, but usually it isn't something one would normally classify as a souvenir. But I enjoyed it and had a lot of fun looking at the magnets and snow globes, etc . . .

We had a nice boat ride on Lake Zurich. The houses are built on the side of the surrounding hills/mountains, so it seems like everyone has a view of the lake. The houses are very large and have beautiful gardens. We also managed to pass the Lindt Chocolate factory while on the boat ride. 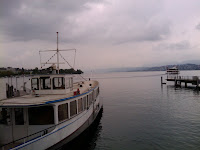 On the third day we had to catch our train to Paris in the evening. Since the station was close by we went ahead and walked over to double check our arrangements. There was a beautiful little market set up in the train station. It was mainly marketing Swiss products - kind of like a farmer's market. We decided to go ahead and have lunch there. Beverly bought roast chicken and I had wanted to try Raclette , a Swiss specialty, before leaving the country. It is actually just melted cheese on bread with sides of different pickled vegetables. Simple, but good. We sat down at the tables with red and white checkered cloths, and a waitress came over and offered us something to drink. I had the best Bailey's Coffee I think that is served on the planet.

There was an old gentleman sitting across from me. he had long white hair past his shoulders and wore a baseball cap. He would lean over and begin talking to me during our meal. We kept telling him we did not understand - but on he rattled. Not having learned and Germanic language, I am really clueless and unable to decipher hardly anything. None the less, we still enjoyed our meal. 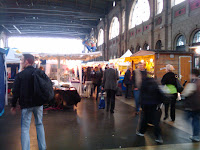 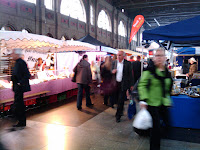 Posted by voixd'ange at 7:02 AM No comments: